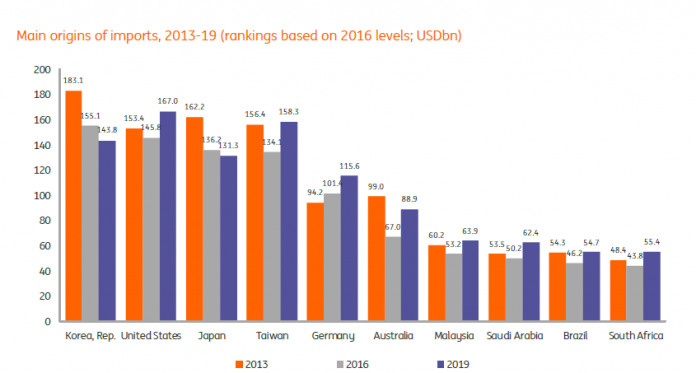 To the latest statistics, China shipped $2.294 trillion worth of products across the global B2B marketplace this year. The interesting fact about Chinese trading is that the import/export value is created at an international level. It has not only elevated trading performance from the past but also resulted in huge profits to date.

The top exports of China contributed to increased revenues are technology, automobile, integrated circuits, telephones, crude petroleum, and more. Each year, these goods are surpassing the amount it exports overseas. It is important to give attention to which economies are China’s biggest trading partners.

We have explored the past trading performance of China and identified leading trading partners. The post will give you an in-depth insight into international trading partners of China along with statistical evidence of potential imports and exports from each region.

Among all the nations, the United States is said to boast the largest economy in the world. Not only this, the U.S. is recognized as one of the leading trading partners of China to date. The bilateral trade between the two nations accounts for $737.1 billion.

The exciting fact about their trading is that the U.S has imported a total of Chinese products worth $557.9 billion while China imported from U.S. goods valued at $179.3 billion.

The nation itself has performed significantly to become a chief trading partner of China. Hong Kong comes at 35th rank in the world’s economy. Still, the bilateral trade association between the two regions reached a maximum of $401 billion.

The research highlights that China has imported products from Hong Kong, valued at $291.7 billion. Similarly, products from China were shipped at approximately $278.8 billion value. The biggest challenge in trading is reported in terms of re-exports. Hong Kong has no tariff on its goods, and that’s the reason it is recognized as the freest economy in the world.

Why would Japan be left behind in becoming China’s trading partner? Well, it is known as a second-most leading trading partner of China with a total of $330 billion product shipment.

The records state that imports from China were valued at $180.7 billion. Japan itself exported the products at $149.7 billion value. It seems like bilateral trading between the regions will continue to increase with elevated demands in the coming years.

South Korea also has a prominent connection with China’s B2B platform. The records highlight that bilateral trade between the nations was $274.24 billion. While making a great external relationship among each other, the business is believed to be unique and useful for the economies.

The international trade statistics indicated that South Korea shipped its exports to China at $125 billion value. However, South Korea itself received imports from China valued at $150 billion approximately.

Another prominent trading partner of China in the list is Vietnam. This is not surprising that the bilateral trade among these nations is currently recorded as $106.7 billion.

China B2B platform has provided an opportunity for Vietnam to continue trading by developing positive relations. This has marked another identity of Vietnam as an attractive destination for the majority of Chinese enterprises.

Did you know? The famous and most effective leading trading partner of China has been Germany for long. It is the third consecutive year that bilateral trade between the nations is recorded as $225.7 billion.

China has accounted for its largest share of the German economy. It has supplied goods to Germany worth at 106.2 billion euros. Additionally, Germany offered a large number of products to China worth 13 billion euros.

Taiwan has also successfully developed strong trading relations with China. This has accounted for a bilateral trade worth $197.28 billion. It is another highest trade accounted in China’s history to date.

China is the most innovative and chief trading region in the world; it has contributed to other strong economies in bilateral trading. The list provided in the post endorses top-most trading partners of China. There are many other nations as well that China has favored with other imports and exports. It is clear to us that China has maintained a balanced trade with the rest of the world.

5 Essentials To Consider Before Moving To The UK

When circumstances and needs change, we feel about moving out to some...
Read more

Progressive Profiling is the Next Big Thing in the Market

During your first meeting with someone, asking a very personal message might...
Read more